Michael McCarthy, also referred to as “Blind Mike”, entered the Poorhouse in 1869. He was abused by the keepers, Mr. and Mrs. Itter, in the 1893 scandal.

In 1869, Waterloo County became among the first communities in Canada to admit an “inmate” to a newly built poorhouse called the Waterloo County House of Industry and Refuge. 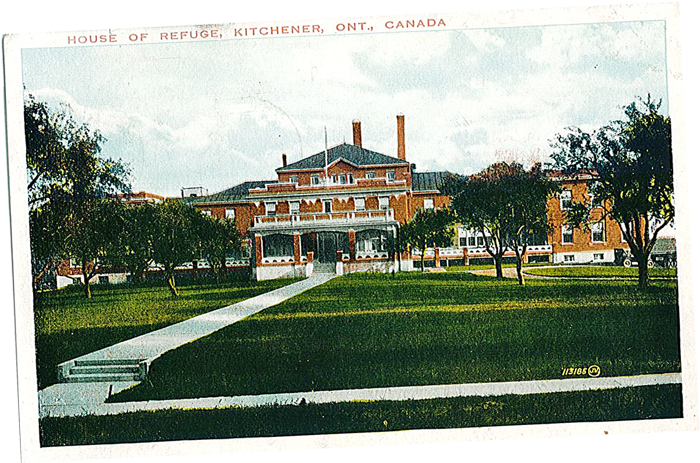 Poorhouses can be described as a “one stop shop” for people without other means of shelter, food or support. For the newly established Waterloo County, the poorhouse represented one of the first examples of organized government efforts to assist residents who had no other options.

In 1871, William Jaffray, a local lawyer and community leader, toured the House in 1871 and notes the absence of grave markers for those who have died at the House:

“We come upon the Potter’s Field, and side by side, rest the forgotten poor who have died in the House, without a single word to mark name, age or anything else connected with the dead….” Perhaps, however, this will be rectified in time, and a decent fence put round the burial ground. It is but fair to presume that county which has done so much for its living poor will not entirely overlook the dead ones—when there is time to think over them, and a little more money to expend”
(William Jaffray’s Day at the Waterloo County Poorhouse Lecture, 1871)

145 years later, William Jaffray’s observations are an accurate foretelling of how the poorhouse and its inhabitants have mostly faded from our collective memory. This virtual museum project seeks to bring the obscure to the light and explore the stories of the poorhouse and the people that resided there.

Levi Carroll was a well-known ex-slave who lived in the Kitchener-Waterloo area during the nineteenth century.

George and Anna Eliza Martin were the Keeper and Matron of the House of Industry and Refuge from 1898-1916, holding the position for the longest period of time.

William Jaffray was continuously engaged with the community, taking on a number of different roles throughout his life. He became interested with the daily routine of the Poorhouse and later went on to publish his findings to shed light on the people residing within it.